Ivory and her identical twin bffs, Maddie and Maggie were walking along a well used path to where they always go after school, the cliffs. It was sunny but a little windy. When there they set up a blanket and sat down. They talked about what they usually did, who was the nicest teacher and what they most enjoyed about their day.

Maggie stood up abruptly. “What’s wrong?” asked Ivory, concerned. There was a strange glint in Maggie’s green eyes, like someone had died right in front of her. Maddie waved a hand in front of her face, “Hellooo” she called. No response. Maggie slowly walked towards the end of the cliff. She looked like she was about to jump, when some water hit her face and she turned around in shock and demanded to know who did it, of course, it was Maddie. Then Maggie asked how she got over there? Ivory replied “You stood up and walked, why?”. Maggie stood perfectly still, her face had a confused look on it. “But I don’t remember anything,” she said her voice shaking.

Crack. Ivory and Maddie clambered back. Maggie, still frozen in shock, tumbled onto the ground. “The cliffs are breaking” yelled Ivory as she reached for Maggie’s hand, she grasped it in her right hand. Maddie grabbed Ivory’s leg and pulled back with all her might, Maggie was still slipping. She looked at them one last time and let go. As she fell towards the rocks and the raging sea, she started to laugh. she laughed uncontrollably as she fell to her doom. Bang! More of the cliff fell and embraced her and the sea.

It was so hard to believe one of Ivory’s best friends was gone in just minutes. The worst thing was, she had watched Maggie die. She felt sick and almost threw herself off the cliff as well but something stopped her, It was  Maddie she was standing still and in shock. Ivory  could see how hard she was trying not to cry. “ Lets go to the police station!” Said Ivory, her voice shaking.“Sure” replied Maddie.

They went down the pathway until they reached their school, the school bully was coming out of detention. He went up to them and noticed they were crying “Oh, look here is the cry baby group” He teased, everyone laughed.

Maddie who has stage fright screamed, “I hope you’re happy now. Maggie is dead.” everyone was shocked and silent. The school bully asked in a timid voice “Is she really dead?” Maddie nodded and Ivory said “ It’s all my fault I let go of her. I didn’t mean to kill her.”

“No it’s not,” replied Maddie as she hugged her bestie, “don’t ever think that.” With that promise they had a funeral for Maggie and went back to their normal life, but they were never the same again.

Ava went for a walk. When she got back her Mum, Dad and Cody, were not there. ‘They must have gone to school’ she thought. She packed her bag and left. When she arrived at school no one was outside, ‘Oh no’ she thought ‘I must be late’. Ava went inside and screamed, her friends and teachers were killing each other. She saw Cody huddled in a corner, his blond hair messed up and he was wearing a face mask. Ava ran over to him, he felt very ill. “It’s a virus” He said “It makes people want to kill”.

Coding and kidoots: https://scratch.mit.edu/projects/452362284
We also did experiments

As well as some gymnastics, it was truly the funnest week

As the females slept, the other meerkats scurried out of the cave. They climbed up to their special pomegranate dangling in a tree.Finally it was ready. They stared at it with pride. Suddenly a dark  shadow passed. The meerkats scattered .  It was Akeldama, the vulture. He had grey feathers, an upturned beak, a bald pink head and he loved to eat pomegranates. Some dust blew in the meerkats eyes. They turned away for 5 seconds, and when they looked back, Akeldama and their pomegranate were gone.

One of the meerkats named Tueur saw him flying away and shouted after him. They speed after him with lightning speed( literally). A meerkat  grabbed  at the fruit but his hand slipped and he fell backwards onto the ground. The others made a meerkat chain, Akeldama  flew higher. Now they could see the females scavenging around to find the missing fruit. Akeldama let go of the fruit, they were falling.

One of the meerkats catches the fruit, Akeldama speeds down and hits the meerkat out of the sky, but the meerkat has already passed the fruit. Now they were playing catch,  Akeldama caught the ball in his talons, but he fumbled. The fruit fell faster than the meerkats. Akeldama chased it fiercely and caught it in one scaly talon he started to fly away cheerfully. Until he felt something hit him on his back weighing him down, It was the meerkats. Without warning they jumped off onto the sandy hot ground. Akeldama continued flying but with his eyes closed.
Splat!!!!! Akeldama flies straight into an overhanging cliff. With the fruit out of Akeldama’s sharp grasp the meerkats were free to take it. It rolled down a sandy slope and sofly bounced off a small rock, Tueur yelled “CATCH IT!!!” Because he missed- they formed a pyramid and caught it with complete ease. Tueur grabbed the fruit. Because he was so proud he drop-kicked the ball over some trees. The females saw and screamed when it hit the ground and splatted. They walked calmly and grabbed onto the males ears and towed them away saying that they will get revenge in dangerous tones.

Sliding, slipping down the steep, dry pathway to the rocky hard beach ready for coaststeering. We were rapped in a bundle; thermals, togs, wetsuits, helmets and shorts. As we walked along the pathway to get to the rocks, we noticed how the rocks and waves clashed against each other. The first time we went in the water it was icy, soon we got used to it because we spent a lot of time in the water( or maybe because we splashed it on each other for about one minute.)

We learnt about mussels and barnacles, as well as had some fun. Our instructor Jamie told us to stand, back facing the semi deep rock pool. The instructor told us he would push us backwards, most people did, even some of the parents did it( if you didn’t you had to put your face in the water and scream hello to the fish.). When I did it I tasted salt. YUCK!!!

Next we could jump off a small rock and big rock, the small rock was called Baby bear which was about 1 metre and the big one was called papa bear which  was probably 11 metres high. When we jumped off baby bear, we had to swim around rocks to get to something we could stand on( of course it was a rock covered in barnacles.) Some of us had so much fun we decided to jump off papa bear. The only thing I regretted from the jump off the rocks was not going first. It was almost time to go. He said we could either belly flop or walk in, he told Shya to belly flop, but she didn’t. The rest of us swam. When we reached halfway Jamie said “ If you want to you can back-flip in the water” 3 did it including me. Just before we went out of the water he flipped me again. We walked across the rocky beach and clambered up the slippery slope. When we wiped all the dirt off us we were ready to go back to camp. 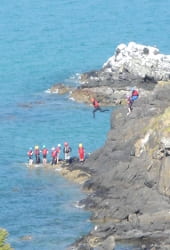